Last year my friend Laura was diagnosed with Endometriosis*. This condition has left her unable to move or function properly, and in constant pain which results in constant medication. Previously Laura was front woman for the festival-favourite band ‘Electric Swing Circus’ alongside other musical projects, and was a regular face in her community. The condition has sentenced her to a life indoors, tired and in constant discomfort.
Endometriosis isn’t that rare. According to sources, it affects around 11% of women, but some suffer the condition far worse than others and it is measured in stages of severity. However, it is not treated effectively on the NHS when severe, and requires expensive private treatment

To bring awareness of the condition and in the hope of raising some funds for treatment, Laura approached me for some photos for her campaign. Amazingly, we both already had the same idea in our heads:

To represent how Laura’s usually energetic life had been ground to a standstill, we decided to create a photo that showed the world rushing around her, as Laura stood still – stuck in space and time

*(Endometriosis is a condition where the tissue that lines the womb (endometrium) is found outside the womb, such as in the ovaries and fallopian tubes. Endometriosis mainly affects girls and women of childbearing age. It’s less common in women who have been through the menopause) 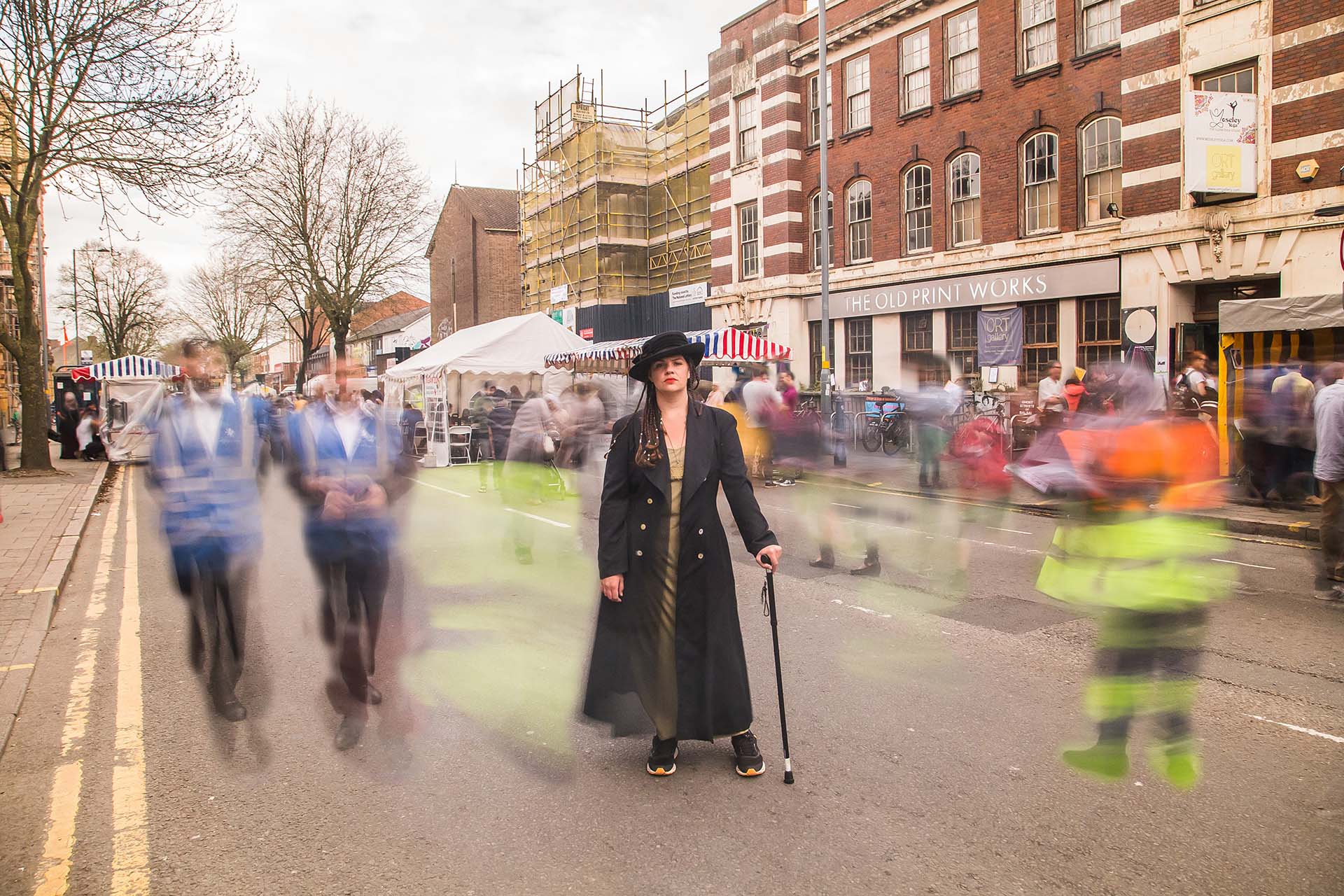 We chose our date and time, and fate was smiling on us. Just a 2 minute walk from Laura’s house, the first Balsall Heath Street Festival was on. The usually busy Moseley Road was completely blocked off, and people were walking between stalls and vendors up and down the street. A perfect location!

The technical principal was fairly simple: Laura needed to remain as still as possible, whilst everyone carried on moving around her – thus making blurring trails as they went. The camera would need to be on a tripod to keep it completely still, as I would also blend a few images together to make sure the best blurry parts were used in the final photos. After a couple of test shots, I settled on a 3-second exposure as the optimal shutter speed (long enough for people to blur, but short enough for Laura to remain still in the photo)

To stop too much light from coming into the lens, I used a LEE 10-stop ‘Big Stopper’ filter. These essentially work like strong sunglasses for you camera, reducing the amount of light hitting the sensor, and allowing for longer shutter times (these are also used to make water movement softer and velvety, amongst other uses)

It took a few shots to get it right, with Laura standing in the middle of the street, hoping that people came into the frame – but not directly in front of her, and always moving. A little blending afterwards on Photoshop and voila! Laura has since used this on her campaign

This photo was never intended for any award/competition when it was created, but 6 months later Wex Photo Video listed a ‘time’ themed competition, which I promptly entered, and was delighted to win (£150 gift card) 🙂